PGA Calls for Industry to Transition to Clean Energy

Producers Guild and Google Announce Recipients of $100,000 in Awards for Producers of “The Short Film Project”

Producers Guild and Google Announce Recipients of $100,000 in Awards for Producers of “The Short Film Project,” Paul Feig and Laura Fischer’s Powderkeg Boards the Two Productions as Executive Producers

LOS ANGELES (February 3, 2022) -- Today, the Producers Guild of America and Google announced the two projects that will each receive $50,000 grants for the production of new short films as part of “The Short Film Project” presented by the Producers Guild of America and Google. The grant recipients are producers Sabrina Ehlert and Ashley Flores for their project Esmeralda and producer Rabia Sultana for her project Haider, Texas. In addition to announcing the producers receiving the grants, Powderkeg, the content company launched in 2018 by DGA Award winning and Emmy Award-nominated filmmaker Paul Feig and Emmy Award-winning producer Laura Fischer that has long championed and discovered emerging and underrepresented creators, is coming aboard to Executive Produce, overseeing the production of the short film projects and serving as mentors and collaborators to the selected producers.

The selected producers receiving the $50,000 grants as part of The Short Film Project presented by the Producers Guild and Google are:

“We could not be happier with the Short Film Project submissions - the creativity and craft showcased in each pitch are greatly encouraging for the future of the producing profession,” said Producers Guild of America Presidents Gail Berman and Lucy Fisher. “These grants connect to one of our priority missions at the Guild, which is to help ensure equitable opportunities for producers from underrepresented backgrounds. Our collaborators at Google and Powderkeg have shared this goal with us from the beginning and we’re incredibly grateful for their collaboration and support in providing necessary resources. We look forward to seeing the premiere of the completed projects this summer at our Produced By Conference.”

“The team at Google is beyond excited to congratulate the first ever recipients of the Short Film Project presented by the Producers Guild and Google,” said Elle Roth-Brunet, Google’s entertainment partnerships lead. “There were so many talented rising creatives that submitted their work, and we’re looking forward to seeing their projects come to life and to continue championing underrepresented talent in Hollywood.”

“We are thrilled to be a part of this amazing program,“ says Powderkeg founders Feig and Fischer.  “The whole reason Powderkeg was founded was to create actual production opportunities for under-represented creative voices, since only by making films can these up and coming filmmakers show the industry and audiences what they are capable of.  To be partnered with the PGA and Google on this effort just makes it all the more special for us.” 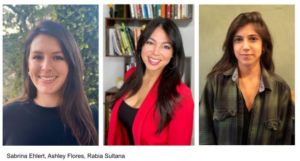 This grant opportunity was offered exclusively to PGA Create Fellows from its recent scripted lab for emerging and mid-career creative producers from backgrounds underrepresented in the industry. The commissioning of new short films from independent producers extends Google’s previously announced lead sponsorship of the PGA Create lab. The recipients were selected by the Producers Guild, Google and Powderkeg. Each producer will retain ownership of the short films, which will receive sneak previews this summer at the Produced By Conference before making their way onto the festival circuit and other distribution outlets.

The partnership was brokered by UTA Entertainment & Culture Marketing, the brand consulting division of United Talent Agency that represents Google.

ABOUT THE PRODUCERS GUILD OF AMERICA (PGA)

The Producers Guild of America is a nonprofit trade organization that represents over 8,000 producers and promotes the interests of all members of the producing team in film, television and new media. The Producers Guild works to protect the careers of producers and improve the producing community at-large by encouraging sustainable practices, creating fair and impartial standards for the awarding of producing credits and promoting a safe and harassment-free work environment. The Guild also hosts educational opportunities for new and experienced producers alike, and seeks to create industry change through its PGA Green initiative, advocating for environmentally-sound productions through its industry-leading Green Production Guide, and its One Guild initiative, which supports inclusive membership, employment, content, and authentic depictions. For more information and the latest updates, please visit the Producers Guild of America website and follow on social media.

For more information and the latest updates, please visit Producers Guild of America websites and follow on social media:

Available on more than 1 billion devices, in over 30 languages and more than 90 countries, Google Assistant helps more than 500 million people every month to get things done at home, in their car or on the go. With the option to select from 51 different voices, people all over the world can have a natural conversation with their Google Assistant and ask for help with things like play music, turn on the lights, or start a favorite TV show.

Launched in 2018 by DGA Award winning and Emmy Award nominated filmmaker Paul Feig and Emmy Award winning producer Laura Fischer, Powderkeg champions new voices with a special commitment to female, LGBTQ creators, disabled, and filmmakers of color by developing scripted and unscripted formats across emerging and traditional platforms. The company recently completed five short films that comprise Season 2 of the female director incubator program Powderkeg: Fuse. The inaugural season of Fuse short films premiered at Sundance and SeriesFest and are in active development, with two of the shorts already landing TV series development at AMC and Netflix. In 2021 Powderkeg launched Everything’s Fine on Snapchat, a coming of age comedy set in the pop punk music scene executive produced by Pete Wentz and the podcast Close to Death in collaboration with UCP|Audio. The original comedy format Q Talks is slated for Roku in 2022. Powderkeg is in development with series at Spotify and a feature at Paramount+. The company’s projects have screened in competition at multiple festivals including Sundance, SXSW, Austin Film Festival, UrbanWorld and Just for Laughs. In 2020, Powderkeg won Best Web Original for their series East of La Brea at UrbanWorld and was awarded an NAACP nomination for the short film Baldwin Beauty.